The new Vue Orleans Experience in New Orleans recently welcomed visitors to its one-of-a-kind exhibits that celebrate the culture of New Orleans. Visitors are invited to explore all the city has to offer through exciting and immersive exhibits that feature something for everyone, including art, music, food, history, and culture.

Cortina Productions designed and produced all of the media experiences that share the vibrant stories of the city, its people, and its history. We used the latest technology for this engaging experience, including transparent displays, AI facial tracking technology, gesture tracking, touchless interactives, large-scale LED walls, multi-user game-based interactives, an immersive theater, and augmented viewers. Additionally, all of the exhibits at Vue Orleans are fully ADA accessible and offer English, Spanish and French languages.

The Exterior Video Art program welcomes visitors by celebrating the unique cultural diversity of New Orleans through performances of over 25 local artists. The performers represent a range of cultures including African, German, Irish, Latino, Los Islenos, Vietnamese and Louisiana Indigenous Nations. A Phantom camera, which has a frame rate of up to 900 frames per second, was used to capture the performers in extreme slow motion, ensuring that the art and beauty in the subtlety of motion is expressed in these moving portraits.

The Confluence of Cultures Digital Exhibits bring the stories of New Orleans to life through fun and engaging digital experiences. The “Do You NOLA” digital interactive wall features 58 fun facts about the city of New Orleans for visitors to uncover. The stories represent several categories from the city’s inventive cuisine and rich cultural sites, to the many different festivals, art, literature and music including the origin of jazz. The wall utilizes the latest gesture interactive technology to allow visitors to uncover stories by simply pointing at animated images within a dynamic digital mural. In front of the digital wall, the personal stories interactive features eleven people who contributed to New Orleans’ unique and diverse history and culture in the 1700s and 1800s. These fun and interesting true stories are delivered by character actors and many have relevance to historical sites that can still be seen in New Orleans today. The life-size characters appear on transparent displays through the latest in touchless interactive technology.

Adding another exciting layer to the Confluence of Cultures exhibits are the Breakout Moments, which take over the large LED wall and transparent displays every few minutes to feature the vibrancy of New Orleans’ musical scene and street culture. There are five different Breakout Moments that present dynamic and immersive shows from the Preservation Hall All-Stars to a second line parade to Mardi Gras Indians.

The Story Café exhibit serves up 12 stories about signature New Orleans dishes as visitors sit at a NOLA-style restaurant bar. When a guest “orders” a dish from their interactive menu, they are served up a 60-90 second story, while the hosts, Chef Kevin Belton and Poppy Tooker, prepare their order on camera telling the visitor fun facts about the dish. The exhibit features dishes ranging from a brunch cocktail to a flaming bananas Foster dessert.

An exhibition about New Orleans wouldn’t be complete without featuring the city’s iconic music. The Music of New Orleans exhibit allows visitors to explore a curated collection of 27 song clips that best exemplify seven musical genres developed in or profoundly influenced by New Orleans. Visitors stand under giant trumpet bells and use UltraLeap Touch-Free gesture technology to learn about each genre and hear clips of songs by influential New Orleans artists from Basile Bares to Big Freedia.

During the one-minute elevator ride to the 33rd floor, which features 360-degree views of the city from floor to ceiling glass windows, the Elevator Up Experience takes visitors on a ride along the Mississippi River through moments in time until they reach present day. Video screens surround visitors and immerse them in the sweeping views of New Orleans as time progresses around them, offering a deeper appreciation for the city’s unique culture and history.

When visitors reach the Vue Orleans 360° observatory on the 33rd floor, they are encouraged to augment their view of the city through Augmented Viewer stations that display fascinating information about the city’s sights, neighborhoods and things to do. Eight stations are positioned to take advantage of the observation deck’s 360-degree panoramic views and feature touchable hotspots of 62 significant historic sites and attractions. The displays swivel left and right to capture a wider view and enable visitors to uncover pop-up icons representing places to see and things to do.

Enhancing the observatory experience are several exhibits that highlight the importance of the Mississippi River and its relationship to the city. The Working River multi-user interactive table enables visitors to play a game at the helm of a container ship, as well as get information about the many different types of ships on the Mississippi River.

The “City at Risk” film explores New Orlean’s relationship to the Mississippi River and the Gulf of Mexico and its vulnerability to flooding. The film highlights the three key ways in which the city has fortified itself against future flood damage since Hurricane Katrina including: wetlands development and protection, fortified floodwalls and pumping stations, and overhauled levees and drainage systems.

The “Rising Up” multi-screen film explores how French, Spanish, Haitian and African cultural influences led to a progressive, free Black community in 19th century New Orleans that would become an incubator of the national civil rights movement of the 1950s and 1960s. Hosted and narrated by Henry Louis Gates Jr., Emmy Award winning filmmaker and host of PBS’s “Finding Your Roots,” the “Rising Up” film is one of the highlights of The Vue Orleans Experience.

Our partners on this project included exhibit design and architecture by Cambridge Seven Associates, exhibit fabrication and AV systems integration by 1220 Exhibits, lighting design by EOS Lightmedia, and AV integration on the Elevator Experience by Electrosonic. 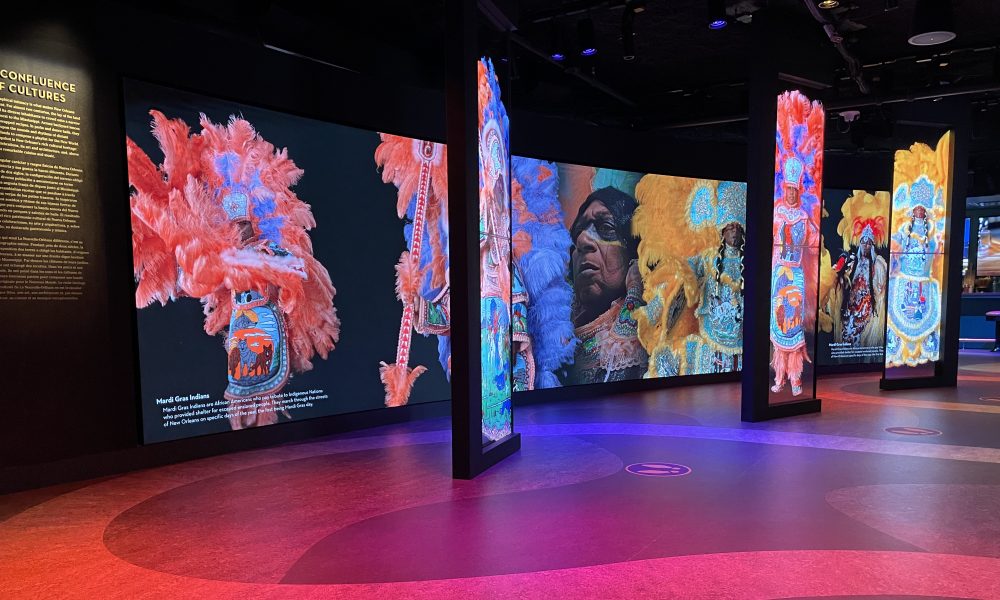 Adding an exciting layer to the Confluence of Cultures exhibits are the Breakout Moments, which feature the vibrancy of New Orleans’ musical scene and street culture. 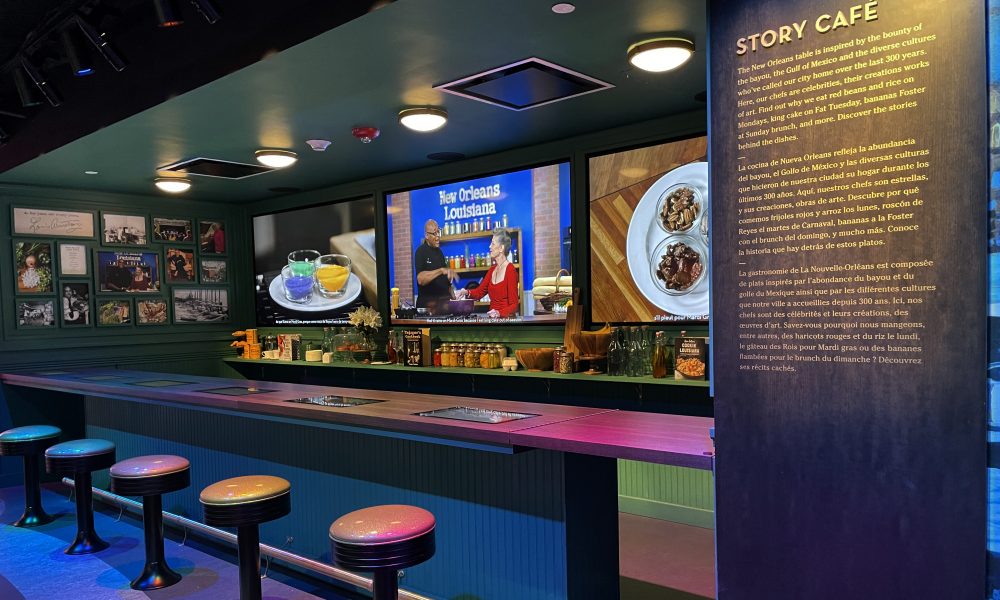 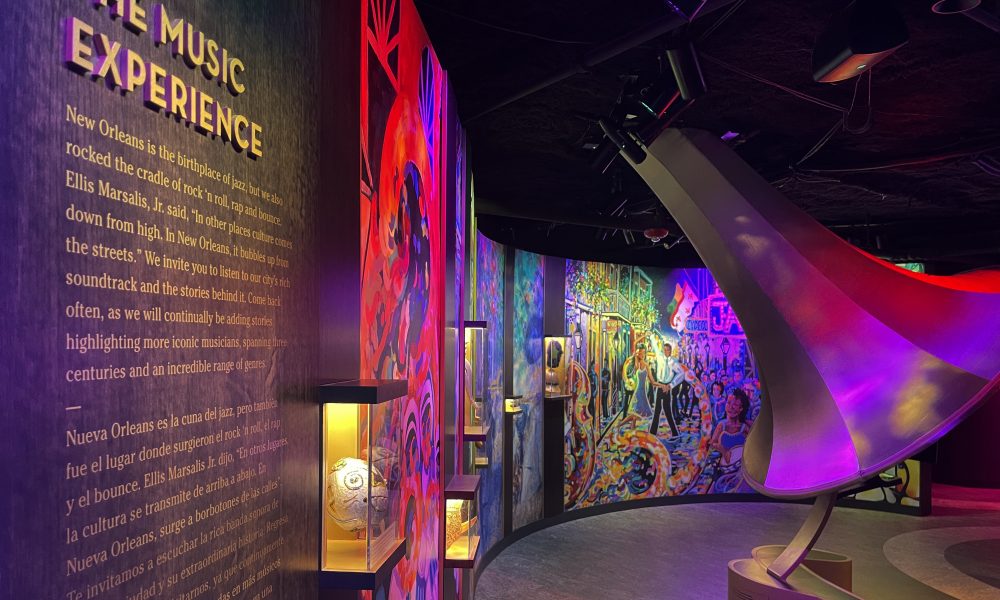 The Music of New Orleans exhibit allows visitors to explore a curated collection of 27 song clips that best exemplify seven musical genres developed in or profoundly influenced by New Orleans. 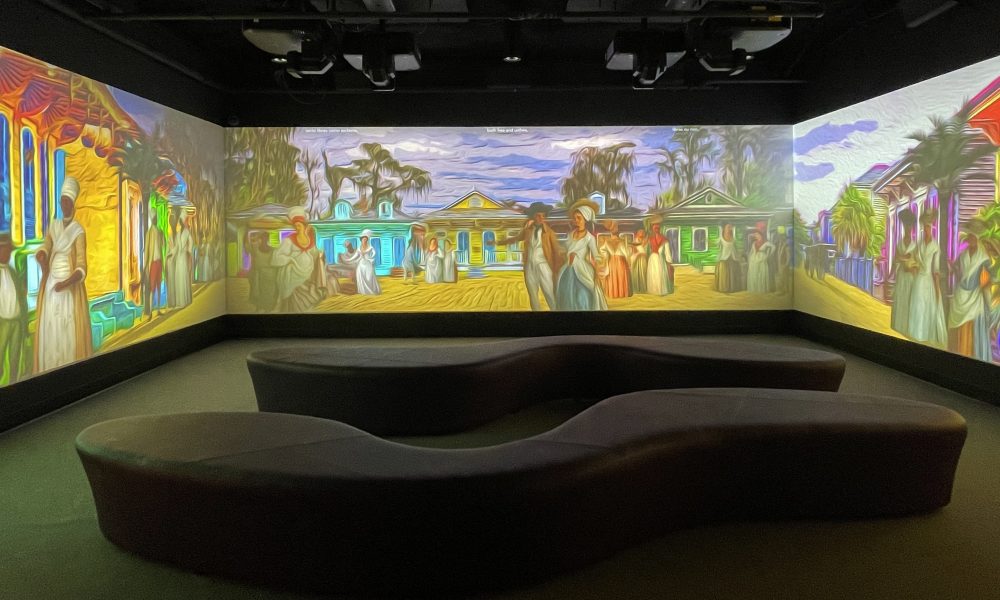 The River Vue Theater celebrates the history and culture of New Orleans through an immersive film presentation utilizing a unique “painted” effect, a poetic narrative, and a dynamic original score. 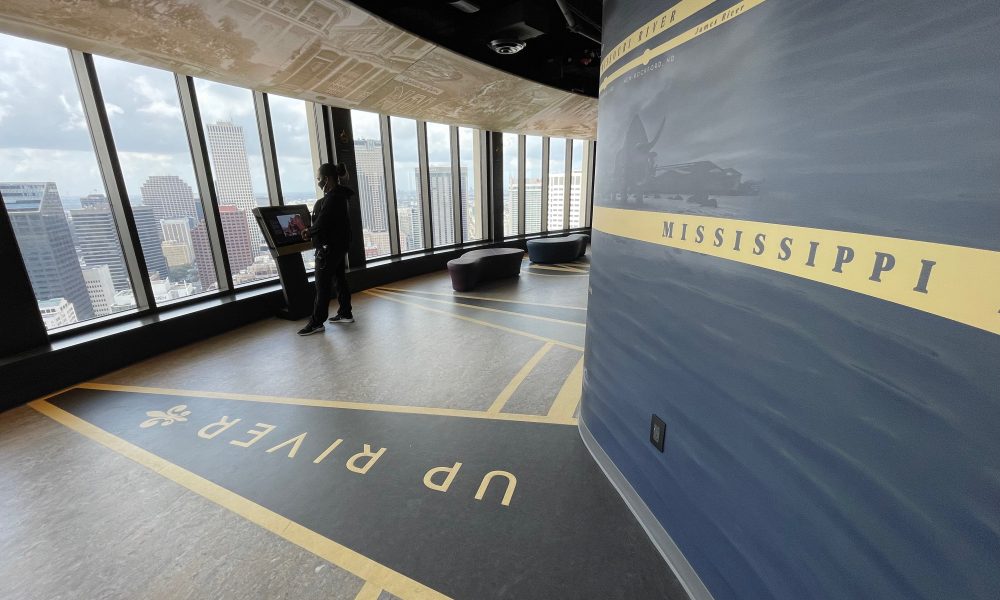 When visitors reach the Vue Orleans 360° observatory on the 33rd floor, they are encouraged to augment their view of the city through Augmented Viewer stations that display fascinating information about the city's sights, neighborhoods and things to do. 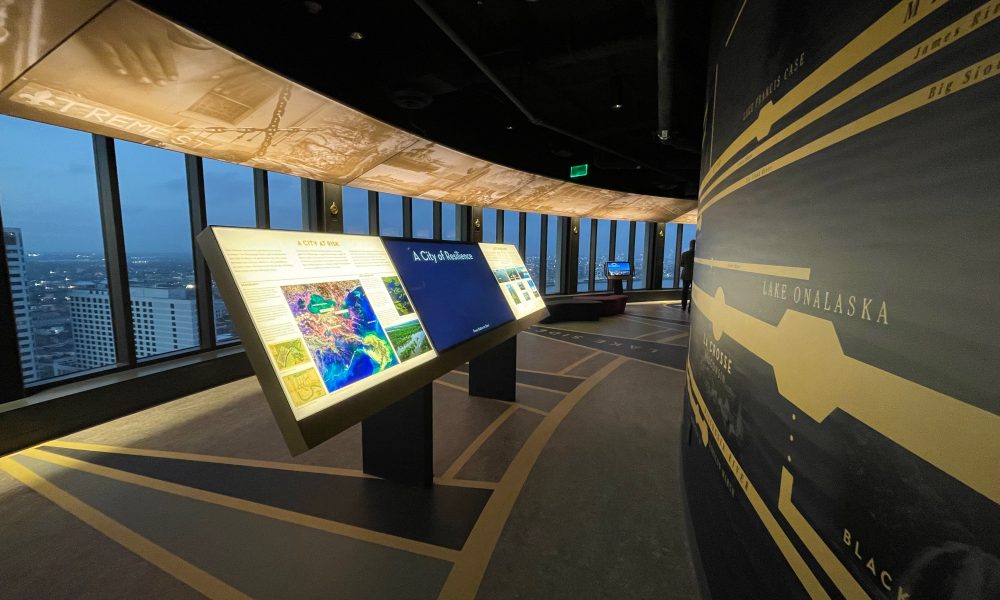 The “City at Risk” film explores New Orlean’s relationship to the Mississippi River and the Gulf of Mexico, highlighting three key ways in which the city has fortified itself against future flood damage 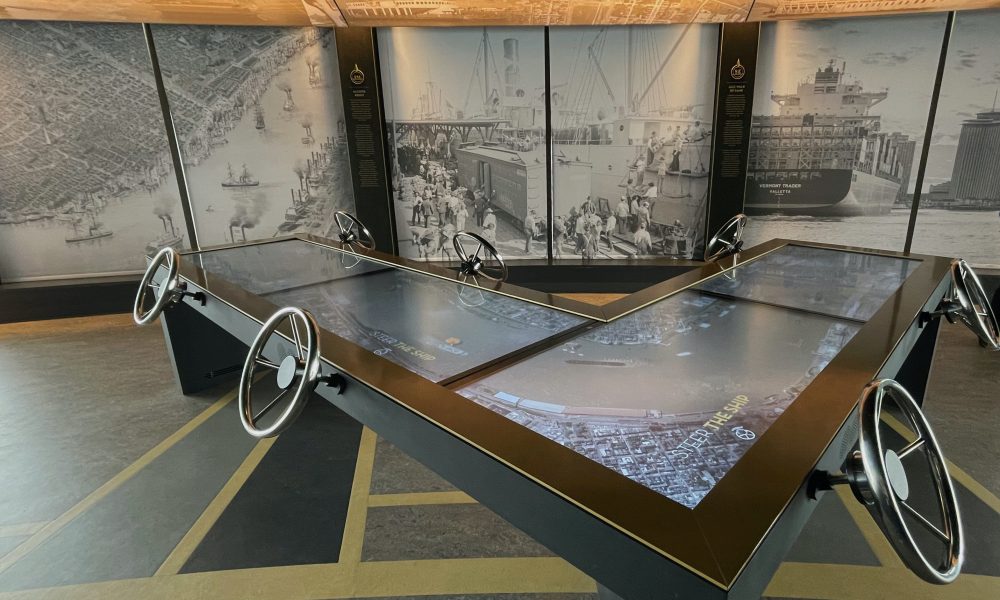 The Working River multi-user interactive table enables visitors to play a fun and educational game at the helm of a container ship.